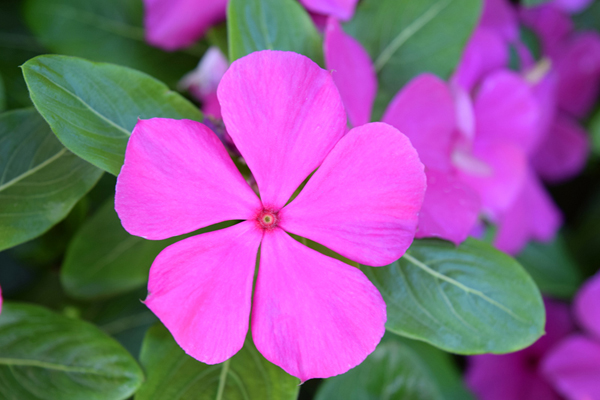 Commonly known as Periwinkles, these cute, colorful flowers thrive in the hottest of Texas summers. The adorable flowers shine their hearts out and provide lasting summer color. Now generally known as Vinca, they are by far one of the showiest annuals for north Texas summers.

Around thirty years ago soil borne diseases came through and devastated Vinca crops. It wasn’t until the introduction of the ‘Cora’ series with its superior disease resistance that gardeners began to see the return of this beautiful plant. Even with its superior genetics there are a few precautions to take when growing Vinca:
Plant later in the season after the heavy rain of spring
Make sure beds have good drainage
Avoid planting in the same bed in consecutive years

The recent string of drought years made these plants seem bullet proof, but last year’s record rainfall resulted in losses for some of those who planted too early. With the proper management and the disease resistance of the Cora series, this bedding plant is arguably the best and showiest for our Texas summers.