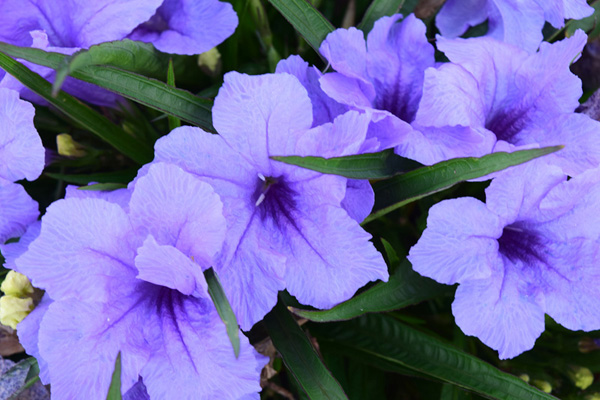 Ruellia’s low-growing, lance shaped foliage forms a lush compact mound with petunia-like flowers. Honored as a Texas Superstar, this plant is tough-as-nails and easy to grow. Neglecting this plant will not be an issue. For the most impact plant in full sun for summer long color, flowering will not be as profuse if planted in partial shade. It is extremely versatile and can be incorporated into moist or dry locations -- Ruellia is drought-tolerant once established, but water regularly if you desire prolific blooms.

R.simplex was the first name given to the plant when it was discovered in Cuba and merely refers to the plant’s simple leaves. The Genus Ruellia is named after Jean de la Ruelle, a French botanist and physician to Francois I, the king of France from 1515-1547. It is most commonly referred to as Katie’s dwarf ruellia in the green industry, an ode to Katie Ferguson of Texas. She discovered this variety by chance, a seedling growing in her Conroe, Texas nursery. Continue the line of Texas succession and plant this superstar in your beds today!